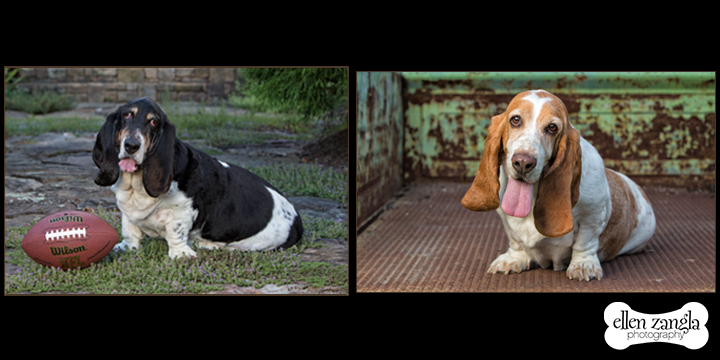 Murphy is ready for the 2016 NFL season as he sits with his football, and Polly looks like she’s tailgating in the back of the truck, so on the second Sunday of the season, I thought this was a great day to share photos of this pair of Basset Hounds.

When Murphy and Polly’s mom and dad called me, they just wanted me to photograph Murphy, as he was recently diagnosed with cancer and they wanted to capture some great photos of him while he was still feeling well. Annika (their mom) told me that Polly got car sick and that she was challenging to photograph, so they just wanted to focus on Murphy. At the last minute, they decided to bring Polly and all of us were glad they did. She enjoyed the car ride, and I was able to photograph Murphy and Polly together and get some great photos of her by herself, too. Personally, I think she’s incredibly photogenic. And this is the fifth time I’ve photographed Basset Hounds, and they’ve always been a pair.

Murphy’s parents love the way he sits with his chest puffed out looking regal, and he is his dad’s football buddy, so the photo of him with the football is a really meaningful one of him. And Polly just looks happy.

Ellen Zangla Photography—Specializing in pets and the people who love them.