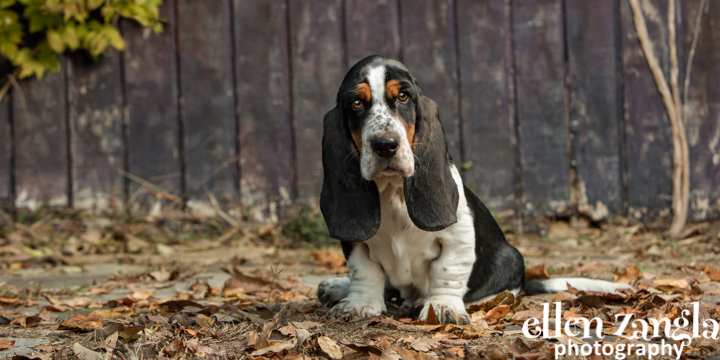 I photographed Quincy’s older brother and sister (Murphy and Polly, two Basset Hounds) in late summer, before Quincy was even a thought in his (adoptive) parents’ minds. When they scheduled a time to pick up their photos, his mom mentioned that they had adopted a new puppy and that they might bring him along for the ride. To which I replied, “Might??,” with major astonishment that they would consider not bringing him. I’m a pet photographer—why would you not bring your new, extraordinarily cute puppy for me to meet? (The perks of being a pet photographer are numerous; getting to play with puppies is definitely one of them.) Anyway, obviously he came for the ride; as soon as I saw him, I went right back inside to get my camera, as there was no chance I wasn’t going to take a few photographs of him. The cuteness! Sigh. As it turned out, his mom and dad wanted to sign him up for my “Watch Me Grow” plan (three photo shoots over the course of a year documenting a puppy’s growth), so I will be photographing him two more times in 2017—more cuteness coming! And he will be growing a lot. He is a European Basset Hound and could end up weighing 100 pounds (dad has his fingers crossed that happens, mom, not so much).

Ellen Zangla Photography—Specializing in pets and the people who love them.

Meet Lyla and Her Family